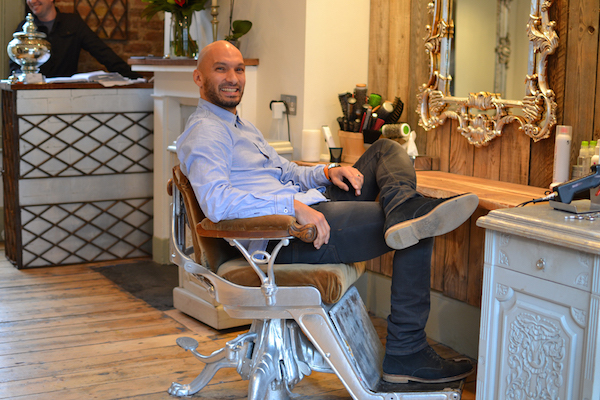 Let’s face it, we are always interested in how the celebrities look good, not least of all how they wear their hair. So where do they go? Word on the street is that Three V Hair Salon is the new infamous but not closed Antenna Hair Salon. Quite possibly, even better and that is no mean feat.

Antenna Hair Salon was once the mecca to all the big celebrities who wanted to add length to their hair. Stars included Cheryl Cole, Elle McPherson, Kate Moss and Mick Hucknell – to name just a few!

Antenna Hair Salon was the brainchild of Simon Forbes in the 1980’s became famous because of his his invention of Dome monofibre hair extensions. Simon was awarded the Fellowship of British Hairdressing Millennium award, for his ‘outstanding contribution to the hairdressing industry. Antenna Hair Salon was located in the heart of Kensington, It was such a unique, one-of-a-kind place, with its trendy wrought iron furniture, tiny spiral staircase and charismatic exterior.

Through Antenna Hair Salon, Simon Forbes basically revolutionised the hair extension industry by creating a completely safe and non toxic approach to hair extensions. Dome monofibre hair is attached with a small heat tool called a C2 (which has also won awards for it’s innovative design), which seals the hair bond by keeping a steady slow heat, which in turn does not damage the hair or the scalp, no glue or any other binder is used.

Needless to say, when the funky Antenna Hair Salon closed it doors, it was game on to see who would rise to the challenge and take its place. Some tried and some failed, but rising to the top like cream on milk was Three V Hair Salon, based in trendy Notting Hill. It is hardly surprising, given that it is run by two of the top stylists of the now defunct Antenna hair salon: Julien Guyonnet, former managing director of the now closed Antenna hair salon with Nacho Varela formerly the top stylist and educator of Antenna and Dome cosmetics.

Both are certified monofibre hair extensionists, and some say, they are equally charming at worse. It is hardly surprising that people flock from all over the world for their services. Just like Antenna in its hey days, The V Hair Salon is edgy and cool funky! And just like Antenna Hair Salon, it very quickly got on the map and became one of the most sought after celebrity hair salons in London.

Three V Hair Salon, a bespoke specialist in monofibre hair extensions, is counted with the best stylists in the world. Not only do they just use the technique that celebrity adopt, they actually are the stylists to the celebrities including Kate Moss, Elle Macpherson, Mischa Barton, Peaches And Pixie Geldof, Vanessa May, Lisa Scott Lee, Vanessa Feltz, Russell Brand and many more! The salon is dedicated to Monofibre extensions fulltime. Their loyal clientele, from the days of Antenna Hair Salon, still follow them to this day.

So what is the big deal about monofibre hair extensions that came out of Antenna Hair Salon. For one, it looks and feels as natural as your own hair (if not shiner!) and can be matched to the exact colour of your own hair (with 22 different colours to choose from).

Monofibre hair is lighter than human hair and is also a much cheaper alternative to human hair extensions. The hair is an acrylic and comes in different textures from straight to wavy and curly and even suitable for those wanting dreadlocks. The hair is easy to maintain and even when exposed to chlorine, sunlight or salty weather, will not fade or become brittle.

Dome Monofibre hair is a great alternative for clients who feel wearing human hair extensions are immoral. The hair will last a good 3 months and will not cause any damage whatsoever to your own hair.

Sadly, the days of Antenna Hair Salon is over but no worries, there’s a new kid in town! Why not come in for a consultation today? Contact Three V Hair Salon